Who Owns The Copyrights for Synthesized Speech?

We asked Google’s legal team about it, and they asked us to ask a private attorney.

So, we asked one of the leading copyrights attorneys - Attorney Rod Underhill from California about it.

Here is the question, followed by his formal answer.

Question I use the Web Speech API via Chrome to synthesize speech of my original text. I record the output audio using some other software.

Do I own the copyrights to that recording? Can I sell the recorded audio file? Can I use it in my commercial YouTubes for instance?

According to Chrome’s terms (as depicted here: https://www.google.com/chrome/browser/privacy/eula_text.html), it would seem to me - I am indeed the owner of the recording, as Chrome’s speech api is given as one of Chrome’s services, which I can use to produce my own content. But - I would like to be sure.

The closest answer by Google I saw is here: https://lists.w3.org/Archives/Public/public-speech-api/2013Jul/0001.html Which says the web speech api can be used for commercial. My specific question is about the recorded audio file.

Here is the complete answer we received: 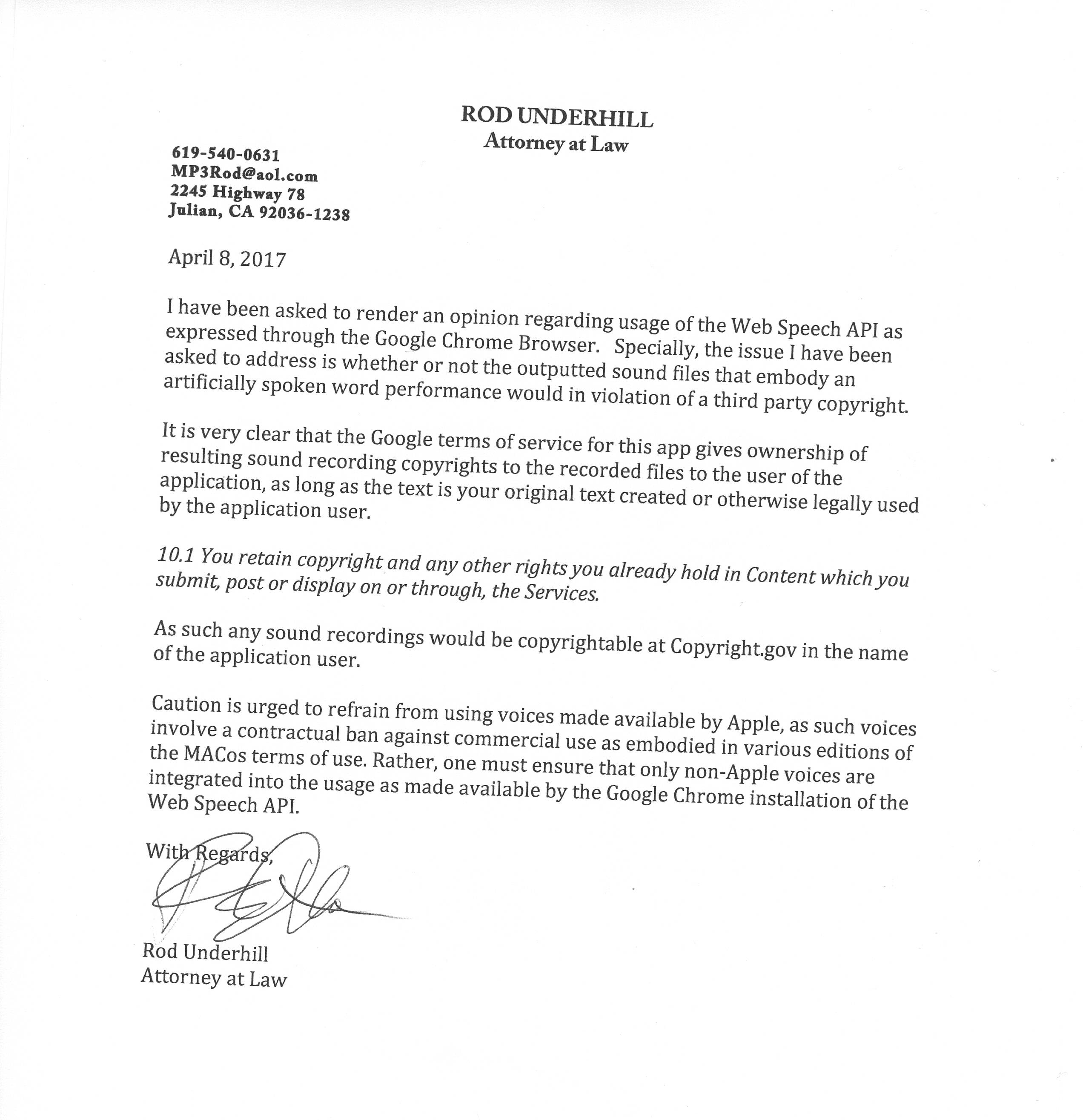 The text of the letter:

I have been asked to render an opinion regarding usage of the Web Speech API as expressed through the Google Chrome Browser. Specially, the issue I have been asked to address is whether or not the outputted sound files that embody an artificially spoken word performance would in violation of a third party copyright. It is very clear that the Google terms of service for this app gives ownership of resulting sound recording copyrights to the recorded files to the user of the application, as long as the text is your original text created or otherwise legally used by the application user.

10.1 You retain copyright and any other rights you already hold in Content which you submit, post or display on or through, the Services.

As such any sound recordings would be copyrightable at Copyrightgov in the name of the application user.

Caution is urged to refrain from using voices made available by Apple, as such voices involve a contractual ban against commercial use as embodied in various editions of the MACos terms of use. Rather, one must ensure that only non-Apple voices are integrated into the usage as made available by the Google Chrome installation of the Web Speech API.

An answer we got from the community can be found here: https://law.stackexchange.com/questions/17999/commercial-use-of-recorded-output-made-by-speech-synthesis-via-web-speech-api-on

I presume the input is text: “my original text” is assumed to mean you wrote (created) the text. That means that you hold the copyright to the text, and only you can authorize a derivative work (such as a synthesized recording). Therefore, you hold the copyright to the recordings as well. The crucial consideration governing that right is that you “created” the work, meaning that there is a modicum of creativity. However, if you did not create the text and your only function is to host an automatic process where users can create a synthesized recording, then whoever created the text has the right to the text and derivative works (i.e. the synthesized output). Automated processes like (unassisted) OCR or wav-to-mp3 conversion would not count as being “original”, nor would automatic text-to-speech, so you don’t gain copyright just from making an automatic work-creating tool available. On the assumption that the conversion involves a component of Chrome, you can use the service per the terms of service, though you cannot “reproduce, duplicate, copy, sell, trade or resell the Services”. This might limit the extent to which you could make this conversion available to others, depending on how, exactly, you could do such a thing (does it duplicate the service?). As they say, Google owns all legal right to the Services, but Google obtains no right from you for any content created through their service. There is no restriction in the TOS against using the service for commercial purposes. Even if there were, that would not assign copyright in the recording to anyone else, it would just mean they could sue you for violating the TOS.

That’s it. So, if you need to generate speech for commercial purposed, we can let you do it, under our contractual terms.

PRIVACY: We respect your privacy - your text is not sent to us unless you chose to use cloud sync. We do use cookies and your local storage to enhance your experience & targeted ads. Read more about privacy here.
Copyright (c) 2015 - 2017, WellSource Ltd. ; all rights reserved.    Based on template by Bootstrapious. Ported to Hugo by DevCows.  Icons by glyphicons and by font-awesome.
Reader BG image includes modification of image by Norman Bruderhofer - Collection of John Lampert-Hopkins, CC BY-SA 2.5, Link.

Upgrade to enjoy a premium ad-free experience with all current and future upgrades. Your contribution will directly support development.

Full refund for any reason

So we can register your premium & sync your text & reader preferences.


If you were not directed to the Chrome Store to purchase premium, simply click on the following link:


Thanks for supporting us, and we hope you enjoy your upgrade, and reach great achievements using it!


Refresh this page after purchasing and enabling the premium-token extension.

THIS IS A PREMIUM FEATURE - UPGRADE TO UNLOCK


Securely purchase on the Chrome store


Important: Refresh this page after purchasing and enabling the premium-token extension.

In short: insert text into the text-box and click play. That's all the basics.